Michael Flinn was born in about 1799 in Summerhill, County Meath, Ireland. His baptismal certificate, dated February 4th, 1803, states that his parents were Thomas and Mary Flinn. (below left). He was baptised in Dublin. Barbara Heavey was the daughter of Mary Anne Pear and Christopher Heavey and was born about 1815. Michael and Barbara were married on October 2, 1831, at Summerhill. Barbara and Michael had lost at least 2 children prior to leaving Ireland, apparently due to drowning. 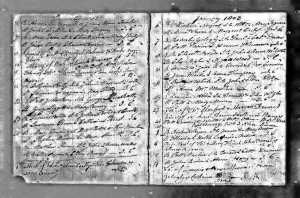 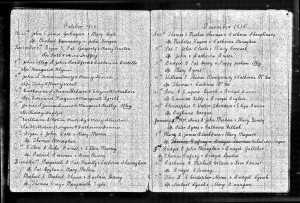 Michael and Barbara and their infant son Michael (baptismal certificate above right) arrived in Port Phillip Bay, still part of the colony of NSW, on May 1, 1840, as assisted passengers on board the transport ship “China”. Michael and Barbara were Roman Catholic and could both read and write and Michael listed his occupation as a labourer while Barbara was a laundress. The bounty for the immigrants on the “China”, 36 pounds for a family, was paid by John Marshall Esquire. John Marshall operated a number of immigrant ships delivering bounty immigrants to Australia in an effort to increase the colonial labour force. His ships had a good record in terms of low death rates and good conditions on board. However, John Marshall was criticised for favouring Roman Catholics and in 1841 he ceased to transport bounty passengers. Shipping record below.

* It is interesting to note that Barbara’s death certificate lists Robert and John as dead (assumed drowned in Ireland), Michael (the infant on the shipping list above) dead, and William aged 65 years in 1900. Thus his birth date would be 1835 and thus he would have been 5 years old when the family arrived on the “China”. He is not listed which could be an oversight. He may also have stayed in Ireland with his grandparents, Christopher and Mary Ann Heavey. Mary Ann and her son Christopher arrived after 1851, the year of Christopher seniors death, and before 1854.

The family remained in Campbellfield in Melbourne until about 1848. Three children, Patrick (1841), Mary Ann (1843) and Elizabeth (1845) were apparently born in Melbourne. Michael junior, born in November 1848 in Moranding, Kilmore, Victoria establishes a possible date for the families move to the newly established settlement of Kilmore, on the Sydney Road, but more importantly a halfway point between Melbourne and the Ballarat goldfields.

Michael and Barbara may have had as many as 13 children. 4 boys, Michael, John, Robert and William, are recorded as being born in Ireland, with Robert and John dying in Ireland, possibly from drowning. However, only one child, Michael, is shown on the immigration record. Michael died in 1846 in Melbourne aged 10 years. There were 9 children born in Australia, Patrick born 1841, Mary Ann born 1843, Elizabeth born 1845, Michael born 1848, Thomas born 1850, Joseph born 1851, John born 1854, Barbara born 1856 and Peter born 1858.

In 1854 Michael Flinn had a license for 1520 acres at West Moranding, for which he paid a fee of 10 pounds. He is shown as having 4 horses, 26 cows and 3,500 sheep. His stock had an assessed value of 30 pounds. The land grants are shown in the images below.

In 1854 the Flinn’s appear to have known the Kelly family as John Flinn’s baptismal certificate shows his godmother as Ellen Quinn, the mother of Ned Kelly.

In July 1871 Mary Anne Heavey (nee Pear) died in Germanton aged 85 years. She probably arrived in about 1854 or 1855 with her son Christopher, following the death in 1851 of her husband Christopher in Ireland. As the assisted immigrant scheme had ceased, due to the gold rush, records of immigration were not very accurate as there was no need to keep accurate records when no bounty was due.

Michael Flinn died September 12th, 1872, and is buried in Holbrook, then known as Germanton, and his abode was listed as Mountain Creek.

In 1872 Michael, Patrick and Patrick junior all had land grants at Mountain Creek. In 1878 Michael, John and Peter Flinn arrived at “Oakview” in French Park NSW. French Park is close to The Rock and about 40 kilometres south west of Wagga Wagga. Michael married Elizabeth Harrington in 1878 and remained on “Oakview” while John and Peter returned to Germanton (Holbrook).

John and Margaret Flinn married in Grenfell in 1887, Margaret’s hometown, and then moved back to the Germanton area to manage the Woomargamma property. In 1900 they relocated their family to “Bellevue”, Grenfell, NSW.

Barbara Flinn appeared to move between the homes of her children, appearing in Grenfell in about 1896 for the opening of the Piney Range Church. In the photo below Barbara is on the left of the young boy, her grandson Michael. Her son John Robert Flinn is on the left and slightly behind his wife Margaret who is on the right of her son Michael. The couple to the left and right of Barbara are Margaret’s parents Thomas and Bridget Cleary, on whose land the church was built. 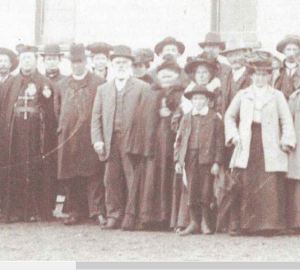 It is also possible that the photo shows Barbara Flinn (daughter of Michael and Barbara) and her husband Patrick Cleary.

Maps, Photos, Certificates, War Service Records and Other Information are available from: